By Robin Brown – Product Manager for Autoscript, a Videndum brand.

Coverage of large, multinational sporting events creates tremendous opportunities for broadcasters, but also some complex and daunting production challenges. A great example is the recently concluded global football event, in which matches were spread across 11 cities, 12 stadiums, and four time zones. Such a large and geographically distributed event creates huge logistical headaches, not the least of which is how to move people and equipment from one location to the other. At the same time, broadcasters’ budgets are squeezed like never before, and they’re facing a constant and growing requirement to produce greater volumes of content with fewer resources.

Remotely integrated at-home production (REMI) is a powerful and relatively new approach that directly addresses these challenges. In principle, REMI reduces the number of crew members needed on location and allows more people to help run a show remotely from a broadcaster’s fixed facility. Fuelled by the growth of IP-based media networks and operations, REMI enables the broadcaster to take better advantage of all its technical and human resources and increase both its production efficiency and output. By reducing the movement of people and equipment, the broadcaster can lower operating expenses, shorten on-site setup times, and minimize the production’s environmental impact.

Teleprompting is a key area that lends itself well to REMI workflows. While other broadcast functions have yet to completely prove their viability for remote broadcasting, advances in IP prompting technology have answered many of operators’ concerns around reliability and latency.

So what’s required for prompting solution that can gain broadcasters’ complete trust in a REMI environment? At the base level, the prompting system should be completely IP-enabled, with every component designed from the ground up around an end-to-end IP workflow. In this manner, the prompting system can deliver the connectivity, flexibility, ease of use, and redundancy critical for live broadcast operations.

Another important factor for prompting in a REMI environment is the ability to send small unicast data packets over the network, instead of the full video feed, for displaying the video script on the prompting monitors. With only small amounts of data sent over the IP network, every monitor can remain in constant communication with the master application to ensure reliable synchronisation and enable centralised management. Rather than all monitors relying on a single video stream from a video generator – a single point of failure – each monitor on the network renders its own script video. This avoids the bandwidth, latency, and synchronisation issues that can arise with full video-over-IP solutions.

Going back to the previously mentioned large sporting event, one broadcaster deployed Autoscript’s Intelligent Prompting workflow across two continents. The broadcaster installed two prompting operations, one at local HQ and one locally at the event. Whichever location was directing the content also controlled the prompting, enabling the two sites to share resources efficiently. A back-up PC was installed at the international broadcast centre but it sat unused for four weeks. The broadcaster’s biggest challenge was how to improve the latency of the audio signal, because the latency of the prompting feed was almost undetectable.

In such a prompting setup, integrating local and remote productions becomes seamless, with the option for one operator to prompt for all studio locations. This means, for example, that highlights shows from a local HQ can include segments from the remote studio and control the script for all locations. 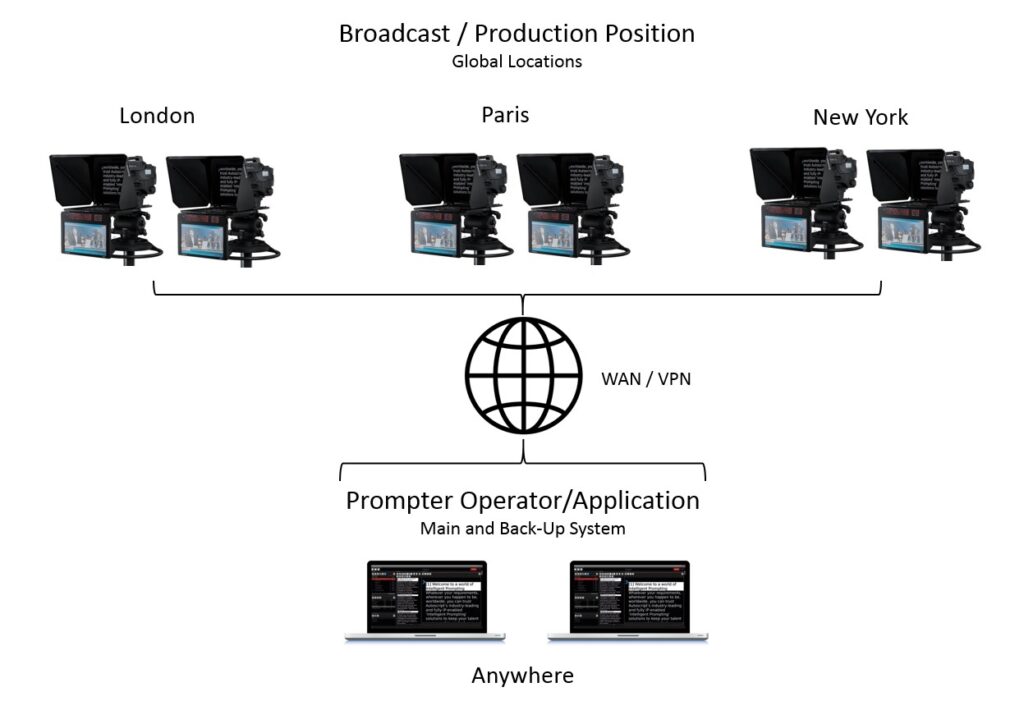 When it comes to prompting workflows, one the biggest questions on many broadcasters’ minds is reliability. Of course, for global live events, implementing a fail-safe is critical. An IP-based prompting workflow creates connectivity without requiring point-to-point connections, and therefore delivers core resilience.

At the prompting application level, this enables a full-redundancy fail-safe by which a mirrored PC, paired with the main application, can seamlessly take over if the first PC/application fails — with automatic synchronisation of script position, individual users’ settings, controllers, newsroom connections, teleprompters, etc. This remote redundancy also safeguards against any local network issues at the broadcaster’s headquarters.

Since all elements of the prompting system are networked devices and therefore not physically connected to each other, controllers in any control room or studio can continue serving prompts from the backup machine, wherever it is in the world. In the example above, the mirror PC that went unused at the IBC could have provided a remote backup if needed, at the ready for the operator to take control with a single click. Because the switch from the host PC to the backup is immediate, the on-air talent might notice nothing more than a fractional, millisecond pause in the scroll speed – if they notice anything at all. In this manner, a remote IP prompting workflow can actually offer more security than a traditional local video workflow.

For live sports in particular, the benefits of remote prompting are potentially huge. One benefit we haven’t mentioned yet is the human factor – having to deploy large teams for global events will almost certainly have an impact on the team members’ home and personal lives. Enabling people to stay at home with their families and work in their familiar surroundings can only be a positive.

IP prompting workflows – based on transfer of data packets rather than full video feeds – are now coming of age. That doesn’t mean that video-based prompting workflows are dead; in fact, a solution like Intelligent Prompting supports customers who are still working with a video workflow by including both video and Ethernet inputs, enabling them to make a seamless transition in the future. Any production planning a major remote event – sporting or otherwise – should consider the logistical, cost, environmental, and employee welfare benefits of integrating prompting into a remote, IP-based workflow.

*Manufactured under licence
Our Brands